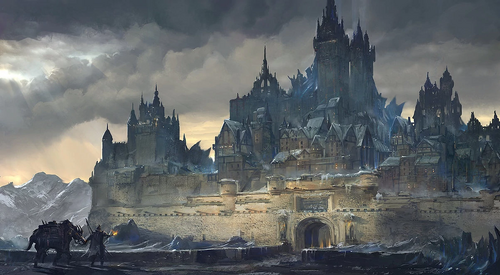 Vanaheim is the seat of the ruler of the north. It is a very large kingdom located as far up north as any man can go without freezing to death. It is the regional capital of the north under which the Mer's city of Viridi and the settlements of the Yeti Mountains fall.

Its royal keep, Bold Castle, is hailed as an impregnable stronghold and is the reason for the kingdom's flag being a Nordic shield pattern. It is situated atop a warm lake which keeps the castle warm even in the worst winters. The castle has stood for millennia.

Vanaheim is a bustling kingdom and it therefore, attracts people from all around the continent from merchants and smiths to farmers and fishermen. Its population is incredibly mixed but there is a slightly larger number of Nordic residents.

Vanaheim's ruler, the Warden of the north, is chosen from among the Nords and the Mer.

Half a million Edeners live within and around the walls of Vanaheim.

Retrieved from "https://edenfell.fandom.com/wiki/Vanaheim?oldid=1214"
Community content is available under CC-BY-SA unless otherwise noted.