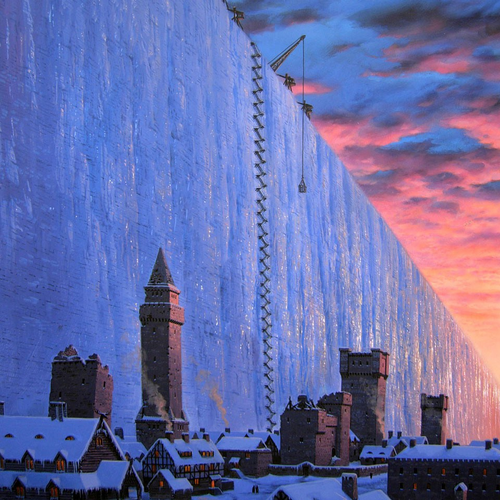 The Northern Wall is one of the two walls that protects the kingdom of Vanaheim . Unlike traditional kingdom walls, Vanaheim's walls end on the east and west and don't run round the kingdom as is conventional. Only the North and South are walled off. The Northern Wall borders the Direwolf Mountains wolfswood.

The Wall has manned castles with packed armories and equipped units of Kingsguard and City's Watch along it. The Northern Wall is the kingdom's primary defense against invaders from the Land of Snow.

Vanaheim's Wall is 1000m high - the highest in Edenfell - and covered completely by thick ice on the surface, an indicator of just how cold the hostile northern tundra beyond the wall is.

The Northern Wall possesses a single enormous gate that serves as an entrance and exit and it quite difficult to open and shut, almost as it is to break through; a task considered impossible.

Retrieved from "https://edenfell.fandom.com/wiki/The_Northern_Wall?oldid=2075"
Community content is available under CC-BY-SA unless otherwise noted.