In the land of Edenfell, most men, no matter their shapes, sizes or races believe in the five gods. They believe that mortals have been placed as wardens of the realm by these gods as an act of trust and that it is the duty of men to protect this world and serve the gods with their lives.

The extent to which one is religious depends entirely on the individual. Elves are the least religious race, often agnostic or pure atheists. They believe themselves divine in nature and as such seldom bow to the gods of other races. Most religious Elves only find faith in the worship of Set, the single Elvish god among the 5.

Scattered all over the continent are: shrines, statues, amulets, temples and even priests/priestesses who devote their body and soul to the overseeing gods.

All of the land is influenced by these gods and their tenets in many different ways. 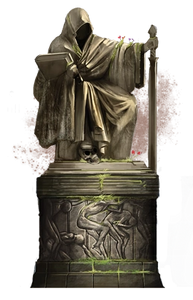 First of the 5 gods, Set is of Elvish origins and has shrines as old as the Alfen themselves. Often depicted wearing a long robe, Set is seen as the father of all life in Edenfell and the creator of most races and creatures that wander the continent. He holds a sword with which he protects his creation from harm and a book with which he instructs the races.

He is also worshiped as the god of knowledge, wisdom and longevity.

Due to the Alfen's history, some see Set as a god of slavery and oppression but that has not led to a decline in the god's worshipers. He can be found in the temple at Alfenheim and at the central temple in Ironhold as well as in many households and places of work where relics and symbols of the god are placed. Priests and priestesses of Set can be seen all over Edenfell, donning long white robes with a distinctive pattern. 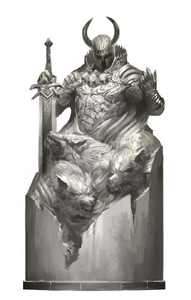 Father of the north and creator of the Nords, Krig is revered all over the continent as the god of war, conflict and victory. He can often be seen in a glorious Nordic helmet, wielding a sword while surrounded by direwolves. Worshipers of Krig believe that he is the brother of Set and the one who protects the mortal realm from the mystic realm.

Relics of Krig are present in every Nordic household and a temple dedicated to the ruthless god has been erected on a small island in Vanaheim. The god of war can also be seen among the other four in Ironhold's central temple.

Urv: God of Craft and Death 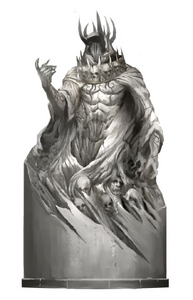 Depicted wearing heavy metal armor, barbed headgear and totem skulls with an army of the dead at his command, Urv is rightfully Edenfell's god of death. He is the warden of the mystic realm and the keeper of souls. Believers say he created the Orcish folk to spite his oldest brother Set, for the misdeeds of the Alfen.

Urv is greatly honored all over the land. He is the god of blacksmiths and artisans and comes to aid the fallen of the battlefield when they are ready to leave the mortal realm.

He has temples in Summerwind and Ironhold.

Gaya: Goddess of the Earth and Fertility 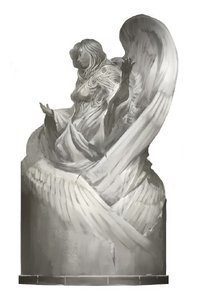 Mother of the Gaians and the earth, Gaya is the deity from which the race derived its name. She is seen as an angelic being, pure in appearance and white as the snow. She is the goddess of procreation, birth and childhood as well. Religious folk say she is the oldest sibling of the god Set and the most powerful of the five deities.

Her temples can be found in Summerwind and Ironhold and her worship is pervasive on the continent.

Titane: Goddess of the Ocean, Rebirth and Redemption 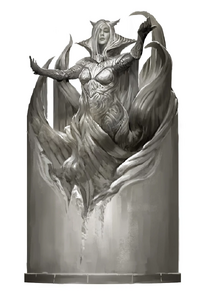 Sailors, religious folk and Mer alike worship Titane as the creator of the oceans and the life of the sea as well as the Triton and their kingdoms. She is depicted as a beautiful goddess, as shapeless as the water but preferring the appearance of female Mer and aquatic beasts when she makes her presence known.

Titane is worshiped all over the land for her tenets of forgiveness, redemption and rebirth.

Her temples can be found in Viridi and Ironhold. Her prophets travel the lands bringing good tidings and messages of peace and prosperity to all who meet them on their endless journey.

Retrieved from "https://edenfell.fandom.com/wiki/Religion?oldid=1170"
Community content is available under CC-BY-SA unless otherwise noted.