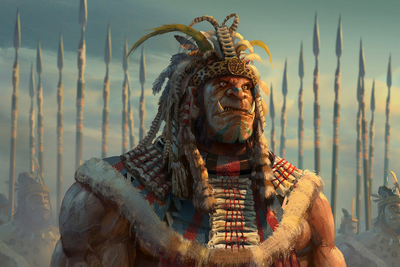 The Orcs were wrongly considered to be a barbarian people by most of the other races and were originally from the volcanic and forest regions of Edenfell. They are centrally located in Summerwind, but are common in other locations in Edenfell.

Orcs are of Elven blood, but this heritage is not recognized by either the Elves or the Orcs due to the bad blood it bears. Having been slaves of the Alfen for generations before gaining freedom through battle with the help of Men, the brutish blood born have no love left for Elves but are reliable comrades of Gaians and have lived in harmony with them for centuries. 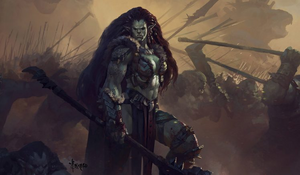 With skin tones ranging from light green to dark brown and sometimes even white, a heavily muscular frame, and considerable stature, the Orcs stand apart among all. They are as tall as Alfen, as big as Nords and as crafty as reds. They also are the only race to display tusks. Born with far less magical affinity than their Elven cousins, the Orcs have developed a strong warrior culture that makes them highly valuable in hand-to-hand combat and elemental sorcery despite this weakness. They often excel as adventurers and legionnaires in the Imperial Order. 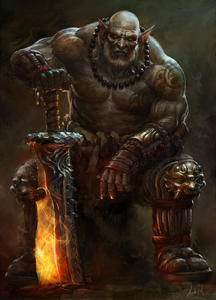 Most Orcs hold Urv as their chief deity, as he is believed to be involved in the creation of the race from the Alfen. Orcs are smart, great blacksmiths, scholars and sorcerers but above all, they thrive the most in battle and they know it.

Like Nords, Orcs are war-born and rugged. They are very resistant to heat and flames and have great resilience. Orcs are skilled melee warriors, wielders of elemental magic, hunters, blacksmiths, traders and teachers. They are quick to anger, do not tolerate infidelity or betrayal but can also be prudent, wise and patient. Orcs are guileful but also trustworthy and reliable allies. It is said that in all of Edenfell, the best friend to have is an Orc because you can trust that they will always have your back.

Like Elves, Orcish combat depends greatly on relics and a combination of deft hand-to-hand combat manoeuvres, brutish melee strikes and elemental sorcery. Orcs believe attacking from afar is a sign of weakness and that an honourable Orc should give his opponent the chance to defend himself, as such, they care little for ranged attacks or weapons such as bows. Their magic has been adapted for close quarters combat, brawling and mowing down multiple attackers. They may not look as slick as Gaians or Elves in combat but they deal incredible damage and are arguably the most effective, heavy-hitters. 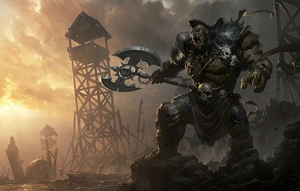 Orcs are stalwarts, religious, strong-headed and powerful. They love to display battle scars, tribal paint and exchange war stories. They live as long as Alfen and value their homes and heritage above all else. They are not always as tough as they like to look, having a weak spot for children, weak, sick and innocent creatures. Orcs, like reds, value friendship and allies and eschew betrayal and disrespect. Their eyes and hair have as many colours as those of Alfen and although the Elves will never admit it, the Orcs are a noble race and a very beautiful one.

Retrieved from "https://edenfell.fandom.com/wiki/Orcs?oldid=811"
Community content is available under CC-BY-SA unless otherwise noted.