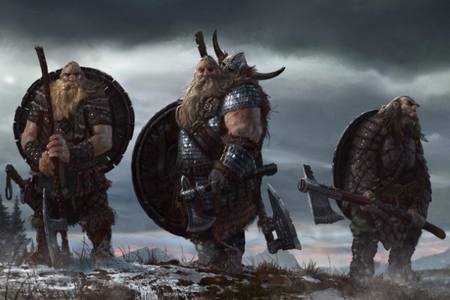 Nords are a race of Nephilim that inhabit the frost-bitten lands of Vanaheim. They are tall (standing at a scale of 2.1m), fair-haired and pale skinned Anthros who are known for their superior strength and incredible resistance to cold and even magical frost.

They are enthusiastic warriors and act as soldiers, mercenaries, merchants and blacksmiths all over Edenfell. Eager to augment their martial skills beyond traditional methods, they excel in all manner of warfare. Greatly skilled in handling nature's beasts, it is no surprise they possess vast summoning and conjuring sorcery. Above all else in Nordic culture is the quest for honour and glory, and a great emphasis is placed on family values. They thrive in the cold of their native Vanaheim and are known as a militant people by their neighbours. 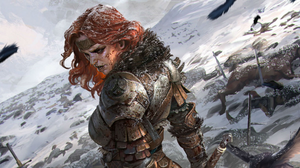 Nords are also naturally superior at sea and have benefited from nautical trade since their first migrations across the sea. They captain and crew the merchant fleets of many regions, and may be found all along Edenfell's coasts. The Nords are excellent with arms. They are quick to anger, boisterous, and strong. They are natural-born warriors who fight with an ecstatic ferocity that terrifies their enemies.

As notoriously rugged stalwarts, the Nords are gifted with an unnatural expertise in two-handed weapon combat, unbelievable strength and outrageous willpower. They prosper in the vast, cold tundra having made all frost and beasts, natural and arcane, their allies. Standing incredibly tall and muscular, they are often referred to as the War-born or Nephilim. 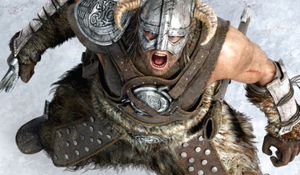 The Nords are skilled at sea and as such nautical tasks such as trading and Viking are their domain. Nordic armour is made of a mix of toughened leather and furs over chain mail, adorned with small iron plates and distinct war paint. Each Nord has a distinct helmet design, from a plain mask over the eyes to a standard open-faced horned helmet to a full-protection horned helmet.

Of all the races in Edenfell, the Nords are the least mystically endowed. They possess very little mana and as a result, depend less on flashy sorcery and gimmicks in combat. They tend to lean towards their overwhelming brute strength and melee prowess, reverting to spell-casting only when necessary; a fighting style often referred to as "might over magic". 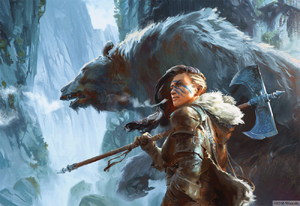 The Nords are blessed with natural mana that easily endears them to the beasts of Edenfell and grants them the ability to cast projections of creatures around them as well as conjure or summon beasts from the mystic realm.

Retrieved from "https://edenfell.fandom.com/wiki/Nord?oldid=1822"
Community content is available under CC-BY-SA unless otherwise noted.