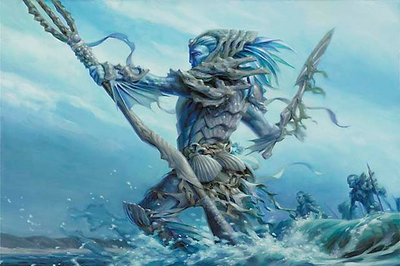 Mer, Merfolk or Triton are aquatic Anthros. Since there is no known record of their origins nor is there a way to estimate the race's age, due mostly to the fact that they lived in seclusion underwater for centuries, it is speculated that Merfolk are Gaians that adapted to the ocean while Merfolk speculate that Gaians are Merfolk that have adapted to live on land. These speculations are mostly because of the similar height, physical prowess and lifespans of the two races as well as the Merfolks' lack of Elven or Nordic semblance. Merfolk, like Gaians, stand at a scale of 1.8 meters.

Merfolk are one of the major races of Edenfell. They have ruled the oceans since the dawn of the races and dwelt below the tides in the flamboyant kingdom of Orm. Through years of evolution, they lost their once completely aquatic respiration as well as their long-term tolerance for salty waters and now the Mer can be found among the Nords in Vanaheim. It is believed that the Nords were taught to navigate the seas by the Merfolk who seldom travel on boats but are devastating when they do go viking with their Nordic allies. Mer believes it is their duty to protect all water and the life it nurtures. They hold the ocean spirit, Titane, as their prime deity and will go to extreme lengths to protect the water as they would their allies. Triton now primarily call the shining city of Viridi, that floats on the Great Sea, their home. 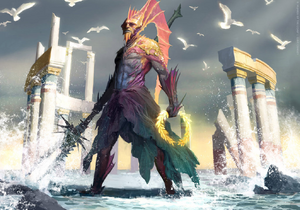 The Merfolk are visually striking. Their fins are colourful and bright like tropical freshwater fish, often (not always) with a large one that protrudes from the back of their heads (often larger among males) and they bear jade jewellery, weapons, and armour. They have become a freshwater species, distasteful of the sea's salt, being only able to cope with the salinity for a short period of time. Mer are known for meditating, with techniques based on heartbeats rather than breath, as they need to stay focused both above and underwater.

Mer are diplomatic and cultured with a noble countenance similar to the Alfen but they are also strong, powerful and ruthless warriors and defenders when the occasion demands it. 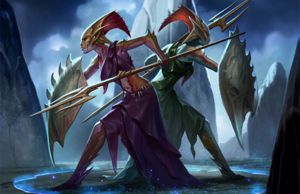 Mer seldom sport armour on their bodies and prefer to don only helmets crafted from carved shells and coated with layers of metal and gold. On a rare occasion, when seen in body armour, the few plates they bear are contrived in the same manner as the helmets and if they carry shields, the shells display sharp-horned spikes that make the shields as good for the offence as they are for defence.

Mer fundamentally wield the same weapon in stylistic and often colourful variations. They brandish multi-pronged forks, inspired by the tridents of their ancestors, with the lethality of a skilled Bō-staff combatant, primed to kill. Their weapons are coated with gold or silver and are as sharp as razors, from the tip to the tail of the prongs. 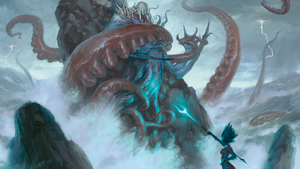 The Triton are skilled warriors, fast learners, mediators, scholars and leaders. In water, they find their confidence, their domain. They swim at immense speeds and with great power, owing to their amphibian physiology that grants them webbed feet and fingers which spread out underwater to propel them forward and manoeuvre swiftly. They have a high mystical acumen, higher than the Gaians and the Orcs, second only to Elves.

Mer are clever, graceful, fast and deadly with a great sense of navigation and a love for nature. They are able to survive on land, breathing the air like other Anthros but their powers wane slowly as their time away from the water increases. 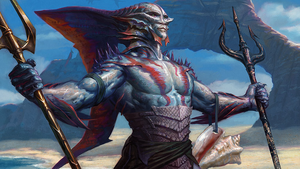 Like Gaians, Mer can be big and brutish or slender and nimble but they are stronger and more resilient to physical damage and as such, Triton combat is a cross between a lithe and nimble Elven warrior and a rugged, powerful Nordic berserker. Merfolk possess vast mana which rivals and sometimes matches that of the Alfen.

They are blessed with a great prowess in the mystic arts and a command of the element of life itself, water. The Triton are the only race capable of wielding aquatic sorcery. They are able to command large amounts of water, creating incredible tides and floods when close to a source and can summon an array of mystical, aquatic beasts all collectively known as Kraken. With magic well incorporated into their fighting style and tridents doubling as relics, it is no wonder the Mer command great respect among the races of Edenfell.

Retrieved from "https://edenfell.fandom.com/wiki/Mer?oldid=2084"
Community content is available under CC-BY-SA unless otherwise noted.