As with all civilisations, there exist in Edenfell, laws that maintain the order of the land and help govern the lives, duties, responsibilities and actions of its people. They are:

Punishable by death. This defaults to beheading, but can be done in more unique ways, such as the Mer's tradition of mortally wounding the criminal before casting them to the ocean whilst weighted. Those who are condemned to death may only be pardoned by a Monarch.

If death is seen as too extreme a punishment, the criminal may be thrown in the dungeons to be tortured by the kingdom's executioner or a person of the monarch's or judge's choosing. The torture may leave the criminal disfigured or missing some body parts. But at the very least, they are still alive. Torture lasts for as long as the judge or monarch decides.

Punishable by exile, or a duel (trial by combat) to regain honour. The accused may fight themselves or choose a willing champion to fight in their place. If exiled, the criminal is banished from the kingdom and stripped of their home, titles and status (including that of Imperial Sorcerer). They cannot return to the kingdom legally and will become Dark Mages if they choose to continue wielding magic.

Punishable by a fine, a determined number of days in the pillory, being incarcerated for a given number of days, or amputation of the hands (in cases of theft). The punishment depends on the severity of the crime and the decisions of the judge.

When condemning an accused to a punishment, the decision is made by the monarch and their court comprised of wise and learned lords that serve as judges. The accused may have someone to testify for them if they so wish, but they must be wary of their reputation if they lose the case. The court will weigh in their decision, but the monarch (or a deputy in his place, often the hand of the king) makes the final call.

The executioner is chosen by the monarch and is typically an existing NPC executioner. However, if an OC wishes to be the executioner then they may ask (OOC and IC). 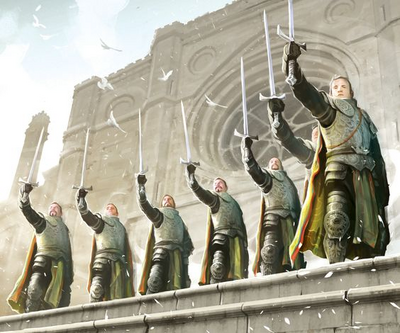 Hundred thousand men strong, the Kingsguard is often the only thing standing between the realm and utter chaos and anarchy. An elite order of Edenfell's most fearless knights, the guard is every bit as skilled as it is organised. 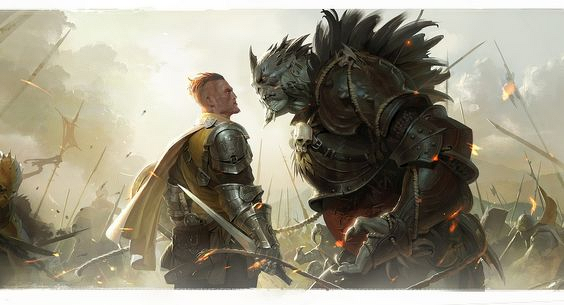 Members of the Kingsguard can come from anywhere in the land. They do not possess magic or any abilities that come with it; void of mana, relics or enchantments. Ascetic in nature, they are sworn off property, women, kin or pride and only bear a single name with no bonds to any known houses.

The guard is considered a sacred order. Their famous golden/white plates and capes, bearing the sigil of Ironhold, can be seen all around Edenfell.

They patrol the streets of the three kingdoms proudly and gracefully. In the capital, they are the army (alongside the Imperial Order) and the shield of the King. In the other kingdoms, they are a policing force, enforcing the laws and order of the realm and maintaining peace.

The Kingsguard single-handedly possesses the greatest amount of Adam's Iron known to man. Each man owns a longsword, a lance, a dagger and a shield, all forged from the primordial metal, making them the most valuable and arguably unbeatable force in the land.

They are sworn to serve the crown, no matter whose head it rests on and this they will do, from the day they take their oath until their last day.