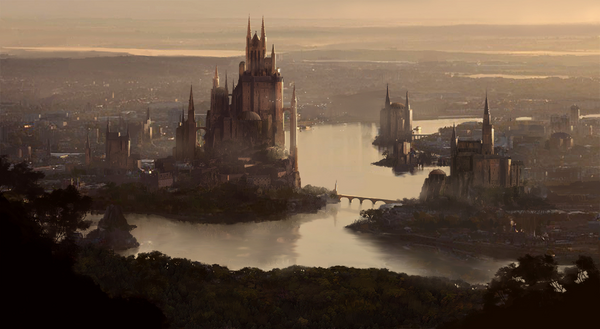 "Every child's dream is to come here, to the capital. To see the knights and their painted armor, and Ironhold when the sun has set. A million candles burning in a starry city."

It enjoys a warm climate and life there is luxurious for those that can afford it, although it is not without its slums such as Witsend. The city is overpopulated and dangerous at times, despite being strictly policed by the Kingsguard.

Ironhold was founded by King Ignis Baal - first of his name, King of the Anthros and the first men.

Despite its opulence and status as the capital, Ironhold is often referred to in a derisive manner by outsiders, making constant mention of the stench of human waste; the crowded population and sea breeze means such smells are particularly pungent.

The Imperial King of the three kingdoms is the one who triumphs in annual ritual combat against 7 contenders, each a champion of the 7 Anthro races.

Ironhold is the largest city in Edenfell, with a population of a million people.

Retrieved from "https://edenfell.fandom.com/wiki/Ironhold?oldid=1212"
Community content is available under CC-BY-SA unless otherwise noted.