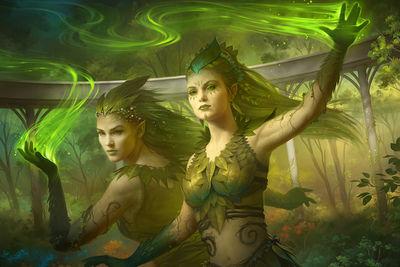 Formerly believed to be cryptids, the Sprites, Fey or Fey Alfen (also derogatorily called Fairies) are a quiet race of Elven heritage that previously lived deep in the woods of Edenfell, high up among the trees. They are the youngest of the Anthro races that dwell on the continent. The Sprites can reveal hidden wings that grant them short altitude flight for a very short period of time. They are fast, lithe and nimble as well as skilled builders and tinkerers.

Standing at a scale of 2.4 meters, Fey look just like Alfen and without wings, can hardly be distinguished from them; this has helped them remain hidden for years. Fey possess strong natural sorcery that enables them to interact with and coax the forces of nature to their will as well as shrink down to shocking sizes (as small as 18cm tall -- average size of an Alpine Marmot). Unlike their Elven cousins, the Fey do not live very long, their days being only as long as those of the Gaian. 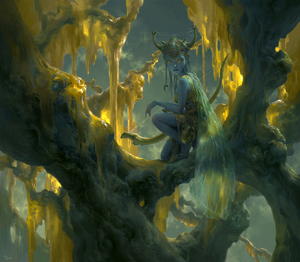 They can be found all around Edenfell and love to live in tree-houses and wooden cabins above the ground. The Fey are often called the wardens of the trees and will go to extreme lengths to preserve wildlife and nature

The Fey wield bows, an assortment of bladed weapons and staffs with great skill and prowess gotten from years of specialized training and culture. Feyrie armour, like their clothing, is scanty and thin, consisting of leaves, branches and other plant parts sewed together to form their colourful, exotic attire and light battle gear.

Sprites are great builders, tinkerers and inventors. They also possess an uncanny mastery of agriculture and are the greatest farmers, wine and honey merchants and tailors in Edenfell. Fey have colourful, insectlike wings that can grant them short flight which they combine with their speedy and swift motion to great effect. Their wings (and sometimes skins) glow faintly under the light of the moon, making them appear ethereal and is perhaps the reason they were believed to be spirits by the first beings that laid eyes on them. 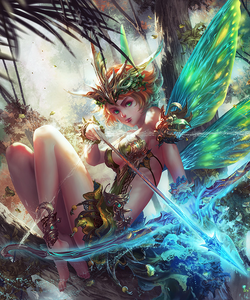 Sprites are great archers, swordsmen and all round combatants but thrive in peace, brotherhood and amity.

Sprites, like Elves, have large amounts of mana. They wield this magic through their ability to bend plants and trees around them to their will. They are also able to shrink their sizes for periods of time depending on their mana. Combined with skilled marksmanship and swordsmanship, their magic is devastating, making the Fey a force to be reckoned with in Edenfell.

Sprites are the only race in Edenfell that possess the ability to "bless" others. An act that transfers mana from the Sprite to the blessed individual. This makes them great allies and a must have for any group in combat. 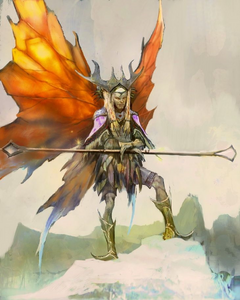 Sprites look just like Elves, with hairless, feminine faces and features, thin bodies and smooth skin. Their hair and eyes, however, are more colourful, sometimes even being a mix of different colours. Feyrie wings are even more colourful than their eyes and come in all sorts of shapes and sizes, only sharing the trait of being insectlike and four in number. Sprites are peace-loving people. They are ambiverts, party-lovers and pet enthusiasts (with their ability to alter their size, they can often be seen riding corgis and cats).

The Sprites are not very religious but value a spirit of amity, abnegation and honesty. Fey can often be aggressive when provoked and are generally not quick to forgive once offended. There is a belief among the Elves that of all the other races in Edenfell, the Fey are the most admirable. Of course, this might just be Elvish arrogance.

Retrieved from "https://edenfell.fandom.com/wiki/Fey?oldid=2085"
Community content is available under CC-BY-SA unless otherwise noted.