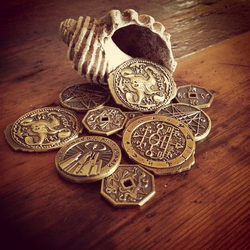 Gold runs the world and the wealthy have a lot of it. In Edenfell, it is almost impossible to survive without coin, silver or gold. These coins are manufactured in Ironhold, under the fire of the mint at Molag's Bank, the chief financial institution of the three kingdoms.

Coins vary in shape and size as well as in appearance, bearing the sygils of various houses and kingdoms and weighing as much as they are worth.

An Acolyte's dragon is worth a thousand gold coins and a thousand more for each new rank it attains.

The wealthiest folk in the land include, in order of affluence, the nobles, knights, lords of the great houses, monarchs of the great kingdoms and the Imperial King.

The capital city of Ironhold is the wealthiest of all known cities and kingdoms, owing to its taxation of the other kingdoms, exportation of drugs, medicines and fine weapons as well as wine production and frequent loans to great lords and monarchs that yield immense returns.

The three kingdoms of Edenfell are regarded as equal in riches and resources. Trade between these kingdoms comprises a lot of goods but the most significant items to be found in each of them are listed below:

Alfenheim is famous for its wine, trading grapes and a plethora of fruits, Elvish Armor, books, paper, ink and wildlife;

Retrieved from "https://edenfell.fandom.com/wiki/Currency?oldid=1169"
Community content is available under CC-BY-SA unless otherwise noted.