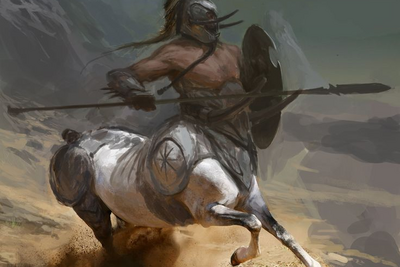 The Centaurian sons of Adam are a four-legged race of warlike creatures whose features combine equine and Human elements. The Centaurs in Edenfell dwell in Alfenheim.

Centaurs have the head (sometimes horned), arms, and torso of a man, but the body of a horse (sometimes two-legged like Fauns). They are often noted for their ferociousness and speed in battle. Centaurs can be very long-lived if allowed to age naturally, living longer than their Gaian counterparts (up to 300 years).

Centaurs are incredible arcane warriors. Every bit as sly and creative as the Gaians. They are intimidating, powerful and above all, have eyes with the ability to see clearly for very great distances. They wield their bows and arrows as gracefully as they wield their projection sorcery and their lyres.

They are great teachers and scholars as well as musicians. In battle, they are almost unbeatable and they will trample on an enemy without hesitation or remorse. The Centaurs claim to be the best archers in all of Edenfell. The Alfen do not refute this.

Ferocity and speed, that is what sets the Centaurs apart from the rest. There is no mistaking the intent in every blow they deal. They shoot to kill and strike to end the battle before it even begins. With the aid of powerful projection sorcery, like their older Gaian cousins, they decimate battlefields in a dumbfounding manner now a signature of the merciless Centaurian combat. 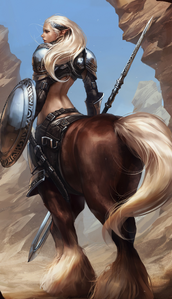 Centaurian family bonds increased in importance after the great war. They have defined family roles: in short, the males hunt and protect the tribe's borders while the females aggressively defend Centaurian civilians while administering the day to day operation of encampments. Males used to be more common on the battlefield, but after the conflict that drove them to Alfenheim, more and more females joined the military forces of the Centaur.

The Centaurs are generally a very spiritual people that combine nature worship with ancestor worship.

Centaurs have a deep reverence for their nature spirit, whom they vehemently deny is an aspect of the Gaian goddess Gaya. Centaurs love meat and value a good, roasted boar as much as they do their weapons.

Centaurs have pointy Elf-like ears and sometimes display horns. Their hair, eyes and skin colours vary much like the Gaians. They stand as one of the taller races of Edenfell, standing at a scale of 2.4 meters on average, usually measuring up to 1.3-1.4 meters at the withers, but they do have the claim to the heaviest race, weighing at average anywhere from 900 KG to 1100 KG.

Retrieved from "https://edenfell.fandom.com/wiki/Centaur?oldid=2156"
Community content is available under CC-BY-SA unless otherwise noted.