The desert kingdom of the east is ruled from the enormous Castle on the Rock, seat of the Warden of the East and residence of the high and noble families of Summerwind. 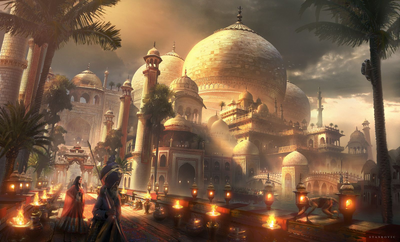 The Castle is an exhibition of eastern architecture, featuring characteristic domes, Muqarnas, Pishtaqs and overlapping arches. Several parts of the massive building are made of pure gold and there are numerous lanterns all around the Rock, lighting up the path up to and surrounding the Castle. 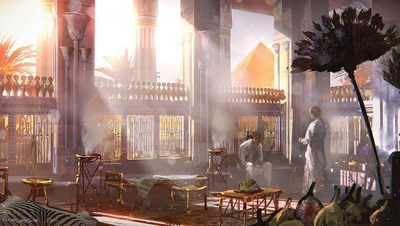 Within the Castle on the Rock, lies the Throne Room of the Warden of the East. 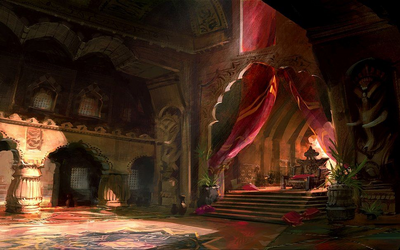 The Kingsguard who constantly patrol the Rock as well as the Royal Guard of the East - a police force of faceless knights in typical eastern masks, wielding Summerwind's trademark scimitars and sabres - are also primarily located within the northern wing of the Castle. 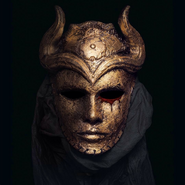 Kingsguard Soldier
Add a photo to this gallery

From here they march out, patrolling the streets, securing the kingdom and incarcerating outlaws within The Dungeons that lie beneath the Rock.

Retrieved from "https://edenfell.fandom.com/wiki/Castle_on_the_Rock?oldid=1577"
Community content is available under CC-BY-SA unless otherwise noted.