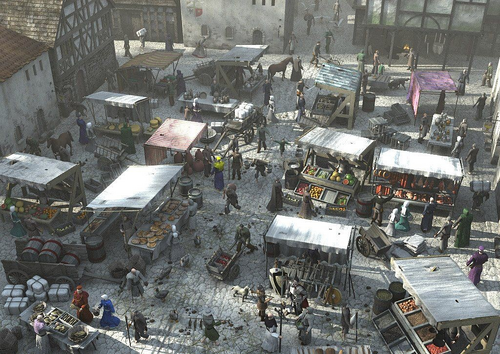 Capital market is the largest market in Edenfell, located close to the harbor and running for a few miles as it ends in Witsend. Food, clothing, armor and weapons, the market has everything you'll ever need, you just have to know where to look...and how to bargain. 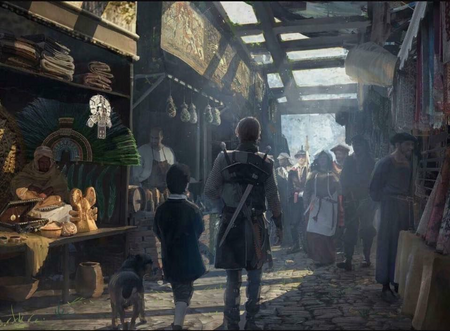 Big shot traders, farmers and all sorts of merchants around the land come to the market to sell their products hoping to earn a great deal. Often rowdy, chaotic and disorganised, the Capital Market remains the main attraction in Ironhold, despite the towering structures and opulent locations.

The Monkey-man is the most renowned spell and elixir dealer on the continent. He is unscrupulous, untrustworthy and exorbitant but, his spells are the most potent and genuine you can find anywhere, or so they say.

His stand is situated at the very heart of the market and can be difficult to find if you have never been here before. Mages - and Dark Mages - come from everywhere to get their hands on these spells (Disciple - Grandmaster level spells; 150, 000+ Silver).

It doesn't matter your name, alignment or goal, so long as you have coin, the Monkey-man does not discriminate.

Swords, pendants, ornaments and rings alike, relic merchants can be found peddling them all around the market. Some have stalls and stands, the rest remain mobile, calling out to potential customers as they wander the narrow ways of the large market.

Strength, speed, durability & temperature type relics of all levels are sold by these merchants from as little as 10, 000 Silver (Apprentice) to 250, 000+ Gold (Grandmaster). Relic Merchants may also enchant objects for customers.

As far as relics are concerned, your imagination and purse are your only limitation.

The Jesterfaced; the sword merchants of the desert

Some traders sell potions, others deal in relics but these ominous and oddly clothed men that swiftly maneuver the different markets in Edenfell, only known as the Jesterfaced, are shrewd salesmen of any and all kinds of swords mastercrafted in the expert forges of Summerwind.

They do not call out or yell and they often remain hidden in the shadows until they scout a potential customer; their focus is singular and manipulative as they employ their words to sway their buyers. The items they deal are hidden beneath characteristically ragged, colorful cloaks that make a silent chiming sound as they move.

If you have enough with you, you may even be able to get an Adam Forged Steel weapon from these uncanny salesmen. 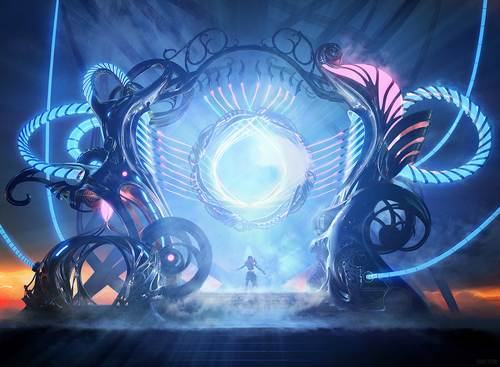 The Three Kingdoms and Ironhold are all thousands of miles away from one another, making traveling between them by conventional means arduous. Terminals are inter-planar gateways created by harnessing transportation sorcery. They enable an individual (or groups of individuals) to move, instantly, from a Terminal in one location to another so long as they have a ticket with their desired place of arrival specified.

Each of the kingdoms has a Terminal station that facilitates travel between them, cutting a journey of a thousand miles down to a single second. Use of the Terminals is free, but they are constantly guarded by the Kingsguard to prevent accidents that would arise from entering the Terminals without a ticket and to stop all known outlaws from accessing them.

Pilgrim's Gate is the biggest and most ostentatious Terminal in Edenfell, located in the middle of the Capital Market where it illuminates the streets even in daytime and outshines the stars at night.

Retrieved from "https://edenfell.fandom.com/wiki/Capital_Market?oldid=1442"
Community content is available under CC-BY-SA unless otherwise noted.