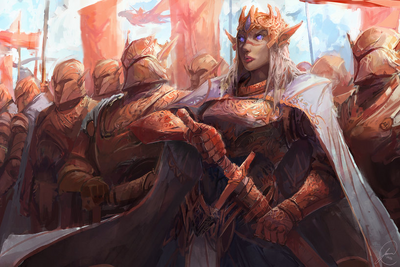 The Alfen are the first of the Anthro races of Edenfell; “the firstborn of Adam,” and as such consider themselves divine deities among the races of the continent. As a race, they are extremely proud of their heritage and make a concerted effort to maintain their genetic lineage. Their name translates from the Alfen tongue as “The Immaculate.”

For their part, the Alfen argue that they are the first true culture, and still the most civilized race, an argument that even Gaian scholars find difficult to refute.

The Elves are the most gifted in the arcane arts of all the races, possessing through their firstborn power, incredible amounts of mana. They exercise great elemental prowess, intellect, prudence and weapon-smithing. Alfen are tall, quick, lithe, limber and can live up to a thousand years. 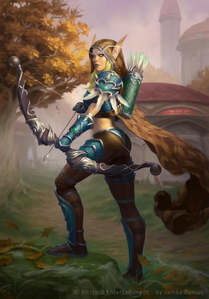 As famed weapon-smiths, they have great skill in the use of arms, particularly archery, which when combined with their immense arcane endowment, can be devastating. They have a high affinity for nature and its beasts, making them great tamers, second only to the Nords. Alfen combat is very fluid, dynamic and sorcery-inclined. They tend to wield combat relics with fatal ferocity and the elegance of a dancer. With so much mana at their disposal, they rain down barrages of elemental attacks on opponents, swiftly dishing out AOEs. Their fighting style while fundamentally the same is unique to each individual Elf. To the watcher, Alfen in combat are an even combination of lethal and incredibly graceful. 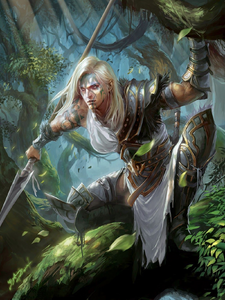 Typically worn by Alfheim soldiers, for millennia the secret of making Elven armour was a closely guarded secret of the Alfen. Elven Armor is the lightest armour in Edenfell, consisting of brightly coloured, overlapping plates of metal, foot-long hexagonal shields and face-shielding helmets that leave only enough room for the eyes to see through and the ears to protrude out from the sides.

As a race, the Alfen strive to maintain the pure-blood appearance of their ancestor race, primarily through highly selective traditions surrounding marriage and reproduction. They are the tallest race among the Anthros, standing at a scale of 2.4m, taller than most Nords and humans. Their skin maintains a very pale gold hue, not quite the pale white of the northern Nords, but far lighter than the Gaian. 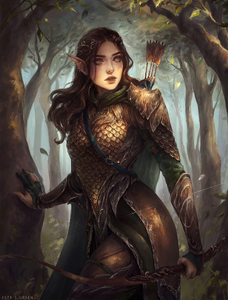 They are slender, with prominently pointed ears and almond-shaped eyes that can be violet, green, blue or amber. Alfen are among the most intelligent and magically-inclined races in Edenfell, surpassing even the Gaian and the Mer in magical aptitude. Elves are well known for their noble countenance, and most are arrogant or disdainful more often than not when addressing other races.

The Elves were the original settlers of Edenfell and credit themselves with the creation of the common tongue used throughout the continent today. They consider themselves descended from the gods, and superior to all other mortals. Elegant and sophisticated, many Alfen, as they're known, are naturally proficient with magic.

They are a highly cultured people, known for their breathtaking architecture and a massive library of histories and creative works. Alfen possess a noble, often condescending countenance, smooth, fair skin, an effeminate, almost androgynous appearance and a lack of hair anywhere else on their bodies besides their heads.

Retrieved from "https://edenfell.fandom.com/wiki/Alfen?oldid=779"
Community content is available under CC-BY-SA unless otherwise noted.